Yeah, I really wanted to stay out of this China/Hong Kong talk but since it involved the gaming industry, I thought I’d share my thoughts on it. Plus, a similar thing happened with the NBA and I had no way of tieing it in…until now.

So I’ll give you guys the short summary of the situation;

Chung “Blitzchung” Ng Wai, a pro Hearthstone player from Hong Kong, showed his support for those engaged in months-long protests against local police and government in China. Blizzard as a response, has ruled that he violated the competition rules, (aka the kid’s gonna cause us to lose a lot of money in the Chinese market) and have handed out a heavy punishment as a result to save face.

Basically, Blizzard bowed to the Chinese government to prevent losing profit. A similar thing happened with the NBA too. A NBA’s Houston Rockets tweeted an image of a slogan supporting Hong Kong’s pro-democracy protesters on Friday. The tweet was quickly deleted, and James Harden, along other people from NBA bent the knee and apologized to the China superpower when they threatened to deal with the NBA. 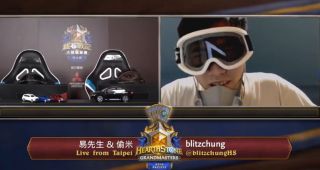 Now, I’m not taking sides here, well I am personally but that’s not what I’m focusing here right now. What I really wanted to highlight, the one thing we’ve all known for years now, but are now starting to see it in action is how hypocritical these businesses can be. Focusing on Blizzard since this blog is a geek blog, they are a cooperation that has advocated for progressive thoughts and freedom of expression in recent years. You’d think that a player, who’s not even associated with the company directly could speak freely about his own people’s struggle and Blizzard just letting it be would be fine but nope! You can clearly see what the priority is for them.

Look, I’m not saying what they’ve done is right or wrong, I’m more focusing on the principle of the matter, how businesses will sell you on this idea of being forward-thinking and progressive, have poster all over their office building propagandizing this idea only when they see a profit to be made. The worst is when people eat that shit up like it’s their last dinner on Earth.

When some people say that businesses like NBA and Blizzard should stay out of the political talk, this is  certainly why because when you expect them to make a stance based on what they’ve been preaching, they’ll back out if it ends up costing them too much money. They are there to make money, that is their only goal and to believe otherwise is foolish.