The chapter starts off with Shin explaining to Sakura how the clones she sees around her are technically living beings with their own thoughts, emotion and mindset and how to him they are nothing more than extra flesh for his recovery. It also turns out that this Shin is the very same guy Orochimaru had been experimenting with and also the same person Danzo got his arm from. His unique genetic makeover seems to be able to adapt to any changes without rejecting other things like the sharingan.

Later on we got so see Yamato for the first time since this series started and boy has he aged. The team have decided to track down Orochimaru to get some answers on the whereabouts of Shin and Sakura. That’s when we see Jugo and Suigetsu. I’m actually a bit surprised to find out that these two still follow Orochimaru, I would have thought they would have just bailed on him after the war and be free but I guess they figured that there’s no place for them in this world.

In all seriousness, I can’t figure out why the Leaf village still allows Orochimaru to continue on with his experiments after all this time, maybe the Hokage has changed Orochimaru and now he is experimenting on a good moral rather than killing and doing evil deeds, guess we just have to wait for the movie to come out. Now this is where thing really takes off.

Sarada talks to Suigetsu about Karin and she finds out that Karin isn’t here so she decides to use the DNA device to uncover the truth on her own. The test results came in and…Sakura…is NOT the mother. The device showed a match with Karin DNA. This left Sarada in turmoil. 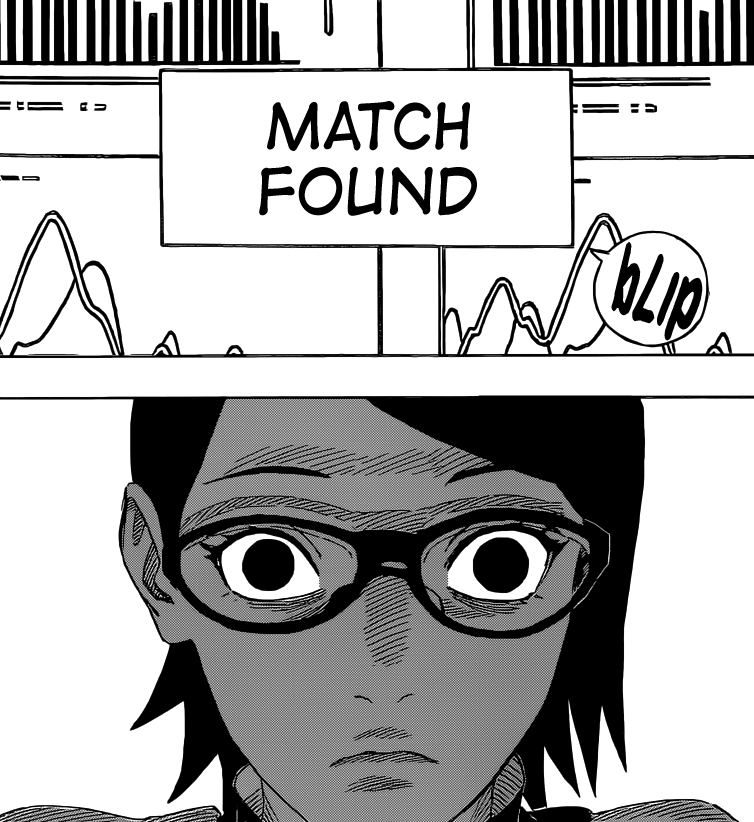 The chapter ends with Sarada deciding that she will not save Sakura as she is not her mother and she doesn’t know who she is anymore. I have to say that this is the most hype chapter thus far and I want answers and explanation has to how this all went down. Overall this was an amazing chapter.